YouthNet in collaboration with the Election Commission Nagaland had produced the election theme song entitled “My vote makes my future” with the hope of advocating the importance of voting and promoting clean election. The song was officially released by the Chief Election Officer Kohima on 1st February 2013. The song was composed by Alobo Naga in collaboration with other local artistes including Tetseo sisters, Renbeni Odyuo, Alo wanth and others. YouthNet also took the initiative of screening the song in different colonies/junction in and around Kohima town. This was done on 8th February 2013 and 15th February 2013.

YouthNet was invited by the Government of Gujarat to represent the state at the Vibrant Gujarat Summit held at Gandhinagar, the capital of Gujarat from January 11 to 13. The event was attended by the likes of Ratan Tata (CEO of the Tata group), Mukush Ambani (Reliance), Adi Godrej (Godrej group) and a number of representatives from large multi-corporations both from India and abroad pledging to invest in what is seen as the fastest growing state in India. They spoke about how investor-friendly the state is, which is very important for attracting outside investments into the state.

Medoneizo Putsure and Margaret Wanth of YouthNet were among the 14 delegates from the Northeast. The Summit had a three day extravaganza preceded by a slew of pre-summit events (conferences and seminars) all across Gujarat that aimed to provide a thrust to the new outlook towards inclusive development. With the aim of providing impetus to the agenda over 122 events was organized under the aegis of the Vibrant Gujarat Summit.

During the Summit, the YouthNet team had meeting with the Chief Minister of the State Narendra Modi and his associates where discussions were held on how both States could work in unison for the development of each region. “YouthNet Nagaland proposed an exchange programme where we could send some of our students to Gujarat to experience the Entrepreneurship Culture that exists there and also welcome some of their students here to set partnerships with our youth and work towards development in our region,”

YouthNet representatives also visited the Sintex Company and met the Managing Director S.B.Dangayach who explained the benefits of using pre-fabrication materials for building new-age houses and schools especially in the north-east region. There was also a talk on the Usage of Solar power and Recycled Drain water usage systems.

2013 was also considered as the year capacity building for the YouthNet team as it believes that for an organization to deliver high performance to its stakeholders, the internal team has to be strong. During this year different members of team YouthNet had went abroad for undertaking short term course to enhance their skills and professionalism. Talichila Imchen (Haggai Institute USA) Hekani Jakhalu (Oxford University) have attended the executive education programme in May and June and Lezo Putsure (Harvard University)

Department of Youth Resources and Sports of Nagaland Govt in collaboration with YouthNet have launched a five-year campaign on entrepreneurship and employment ‘Impact 5000 by 18”.

The campaign aims to enhance business, entrepreneurship and employability skills of 5000 youth of Nagaland by 2018, through various programs. The programs will be conducted through the YouthNet Centre for Entrepreneurship and Employment.

The goals of the campaign are to promote entrepreneurial mindsets, help build an entrepreneurial ecosystem and enable co-creation of socio-economic prosperity. The planned activities include skill development in the agro sector, fine arts, handloom, handicrafts, livestock rearing, business and entrepreneurship development.

Dr.Krishna Tanuku, Executive Director, the Wadhwani Centre for Entrepreneurship Development at the Indian School of Business, Hyderabad would be the chief mentor of the program.

The first program under the ‘Impact 5000 by 18’ campaign titled ‘The Entrepreneur’ was also launched on August 30. The program is designed to enhance business skills of twenty select young entrepreneurs who will undergo a combination of class-room lectures, case study discussions, group activities and individual project development. 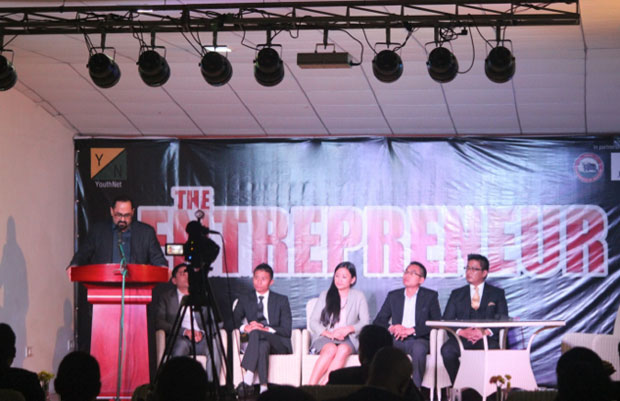 The project aims at Building smarter individuals, better employment opportunities, Individual growth, and better skilled individuals with social consciousness that can get jobs or create jobs in the growing economy, to train 15 Trainees to work in the construction sector and to train 15 Trainees in entrepreneurial skills and set up enterprises.

A seminar on Fashion Designing on the topic ‘How to merge fashion, held at café HIYO on 26TH April with Miss. Seyie Putsure interiors‘ Naga designer. Seyie distinguished her achievements include designing the 54th Annual Grammy Awards and high-profile Hollywood celebrities,etc.

A similar program was also held with Mijito Chishi Indian Foreign Service (IFS) based South Korea. This program was based on career workshop on public administration service held on Friday 22th June at Dream Café Kohima.

Both the event was organized by the YouthNet and Smarter Nagaland with the main purpose to encourage one another while observing that Naga youths are becoming frustrated, cynical and negative about the job at these present scenario.

The Nagaland State Election Commission in collaboration with YouthNet has started the Systematic Voters Education and Electoral Participation (SVEEP) Campaign from October 2013. The aim of the Campaign is to spread the news about why it’s important for voters to be registered and cast their votes during election. To make each one understand the importance and significance and their right to vote and been influenced by various social compulsions that induce individual to vote for a particular candidate. This campaign will travel across all districts of Nagaland and specially colleges of Nagaland to educate young voters to practice clean election and clean voting. The Joint Election Commissioner along with the Members of YouthNet and Alobo Naga and The Band who is the official State icon for this campaign have performed and spread the message of why clean election is important for the development of the state. The team along with the State icon had so far visited Oriental College, Alder College, Modern College, Japfii Christian College, St.Joseph College and Mezhiir Higher Secondary School. The team was led by Hekani Jakhalu (Director, YouthNet), Alobo Naga, Lezo Putsure, Tomtsa Chishi, Ruokuokhrienuo Vizotha, Kuovizo Belho, Memo Riise, Yanpvuo Kikon, Fung Walling and Theja Khate were the other team members.

The government in collaboration with CII and YouthNet had conduct Job oriented skill development Mela at Agri Expo, Dimapur on 20th and 21st November 2013. The Union Ministry of Labour had funded 100% training fees for the selected candidates through the state Government, where 40% of the training fees had to be paid to the VTPs after signing of MoU with them. 7000 candidates registered where 86 VTPs and companies registered and set up stalls. The exact figure of selected candidates for training after verification was done by the Vocational Training Providers and Company.

YouthNet in association with Eclectic Publications organised the 3rd edition of the Young Leaders Connect held on 22nd November 2013, in the Guwahati Medical College Auditorium, Guwahati. This is a landmark initiative that provides a common platform to young leaders who are outstanding achievers from fields as diverse as business, music, tourism, literature, politics, academia and culture. The Young Leaders Connect acts as a powerful network of influential leaders visualizing where they would like to see North East vis-à-vis India in the next 10 years, plan a roadmap for the future and strategize interventions at the grassroots and policy level.

The Theme for the Edition was: “Branding Northeast: speaking for ourselves“, which will develop a positive outlook about the region that looks beyond media reports of conflict to the untapped potential that the region holds in terms of cultural heritage, natural resources, and human capital. The one-day conference was covered with panel discussion and cultural events. Eminent personalities like PrakashJha, Film Maker; Mary Kom, Olympian, Manipur; AnshuJamsenpa, Mountaineer, Arunachal Pradesh; Karma Paljor, Media, Sikkim; Rudy Wallang, Music, Meghalaya; Armstrong Pame, IAS, Manipur; Merentoshi Jamir, Minister, Nagaland among others were the main speakers in the forum and discussed on different issues pertaining northeast.