Right To Information – Awareness for Youth: The Kohima Campaign

The Right to Information (RTI) Awareness for Youth: The Kohima Campaign is a five months long youth movement, to bring positive changes through RTI

Launched on the 14th of October 2011 and will culminated in April, 2012 under the theme “Youth for transparency and good governance”, the campaign was an initiation of the Government of India, jointly organized by Administrative Training Institute (ATI), Kohima, Government of Nagaland, in partnership with YouthNet under the direction of the Department of Personnel and Training, Government of India. The main purpose of the RTI campaign was to empower youth/students to become active members in the society towards checking corruption; and to assist the government in bringing transparency, accountability and good governance.

During this campaign, all colleges within Kohima district were visited by a team of RTI experts from YouthNet, where workshops on RTI were held. Two Student leaders from each college were selected as facilitators for this campaign.

A major highlight of the campaign was drafting of RTI applications, where youths were given the opportunity to file RTI on any government department. Drop boxes to collect RTI applications were paced across Kohima town, wherein YouthNet took the initiative to submit the applications to the concerned departments.

Throughout the campaign, some of the best questions were published in local dailies for public awareness and also to remind government departments to be more proactive in disclosing information. Some other activities undertaken during this campaign included practical training, workshop and seminar on RTI.

During the ‘Young Leaders Connect’ meet Young achievers in various fields from across North East India came together to connect and exchange ideas on topics relevant to the present scenario of the region.

About 15 speakers and four moderators with over 200 delegates gathered at the BambooHall at Kisama near Kohima on Monday as young leaders from the eight NE States came together under the theme ‘Connect, Exchange, Strengthen’. The meet was an initiative of YouthNet.

An initiative of YouthNet, Young Leaders Connect featured youth icon Bhaichung Bhutia as chair and Anato Zhimomi as co-chair and the event was organised in partnership with the Government of Nagaland. The leaders covered a range of topics including sessions where interactions were also held after each session.

Speaking on the topic ‘Governance as Leadership: Connecting Policies with Aspirations’ were Gaurav Gogoi (Assam) and Kirit Pradyot Deb Barman (Tripura). Gaurav  Gogoi, is a development expert who has been studying welfare and youth-oriented schemes of the government, giving top priority to curbing unemployment and improving the education scenario.

Pradyot Deb Barman is a ‘Maharaja’ of Tripura and also the chairman of the Yoral Heritage Hotel, a member of All India Congress and advisor to the North East Regional Development Association (NERDA).

The topic ‘Redefining Development through Social Entrepreneurship’ was covered by Hasina Kharbih (Meghalaya), social entrepreneur from Impulse NGO, who has received numerous national and international recognitions; Sentimong Kechuchar (Nagaland), who works with Sir Ratan Tata Trust, Mumbai and now leads the North East Initiative; Syed Kazi (Assam), ICT and Development and Lead Partner for North East DevelopmentFoundation and Curator of North East Award and Dr Lalrintluanga Jahau (Mizoram), surgeon, who is president of an NGO, Centre for Rural Development and Research, a society involved in rural health care and women empowerment and development of tourism in Mizoram.

The ‘Role of North East in the growing economy of India’, was discussed by Tanushree Hazarika (Assam), who manages Eclectic Times, a general interest magazine in the North East; Larsing Ming Sawian (Meghalaya), hotelier and managing director, Centre Point Group Enterprise, who is also the general secretary of the popular Shillong Lajong Football Club; Abokali Zhimomi (Nagaland), entrepreneur and managing director of Organic Nagaland, an organisation focussed on networking local organic growers, training and empowering Naga men and women at the grassroots level; Neichute Doulo (Nagaland), CEO, Entrepreneurs Associates; Bhaichung Bhutia, (Sikkim), CEO, United Sikkim FC, who is also India’s most capped footballer and first Indian to play professional football in Europe and has won a number of prestigious national and international awards; Lipokmar Tzudir (Nagaland), musician and one of the foremost choral conductors in India with a national award to his name.

Internship Fare and launching of YouthNet Handbook on Career Guidance

YouthNet organised an Internship Fair at Ozone Cafe Kohima, providing opportunities for the unemployed youth and students of Nagaland to intern with various departments and organisations both private and government sector in the state for two weeks.

“YouthNet Handbook on Career Guidance” was also launched during the inaugural function, featuring various professions for students and young people to choose from. 18 chapters of the book include contributions from various local professionals, who are experts in their subject or area of work.

The focus of the Pravah Streaming partnership is to help YouthNet incorporate a youth development approach to their existing work with RTI. In other words helping them build the understanding on how to build the skills of self, leadership and confidence to articulate their stances as they work to create a corruption free society through RTI.

YouthNet Associate Director Joshua Sheqi has attended the Ocean in a Drop course of Pravah and post the course there has been a belief that the youth development approach will strengthen their programme. A visit by the Pravah team was also made to understand the Socio-political-cultural context of the Naga youth and YouthNet’s work more deeply. Kuovizo Belho, the Programme Co-ordiantor nominated by YouthNet to work full time on the youth programme came for a 12 day internship with the Youth Intervention team of Pravah in November 2011. The internship experience supported Kuovizo in learning about Pravah’s work with youth and gaining ideas on designing and facilitating workshops with youth. This was followed by a two day workshop with YouthNet youth leaders in January 2011. The objective was to help them analyze how a systems thinking approach would add a greater depth and quality to their work with RTI. The workshop focused on building self and leadership skills of the students even as they work with RTI. Joshua and Kuovizo also attended the streaming partners meeting at Delhi from 30th April 2012 – 5th May 2012.

Lambency Chrysalis is an Institute of Beauty, Hair, Spa & Nail Art, located at New Delhi, Noida. The institute caters to provide the best training to the youth in term of professional training and Job placement. The Government of Nagaland during the last Three (3) years in partnership with the Institute have already send more than 600(six hundred) youths from Nagaland to get trained. The state Government under its program has initiated this program to help youths from Nagaland to venture outside and learn the work culture of the cities.

YouthNet a Non Governmental Organization have been monitoring the training Program since 2009. They also conducted orientation programs for the students and as a guardian to the students it made sure that the institute is providing quality training and also proper job placement at the end of the training program.

YouthNet has also done a survey on the Institute for assessment and Evaluation of the youths undergoing training at Noida. It can be noted that the institution has so far given placement to 300-350 students in major service centres in and around India.

The recruitment for the first batch was held on 7th March 2009, the 2nd batch was held on 18th June 2009, the third batch on 12th March 2011, at Kohima. YouthNet conducted the Orientation Program where the students were briefed on work etiquette, self discipline, culture change, dos & don’ts, honesty and dedication to oneself.

Two member  from YouthNet,  the Director Ms. Hehani Jakhalu & Mr. kuovizo  Belho  visited the institution on the Month of November 2011 to do a mid- term review of the training at the Institute. 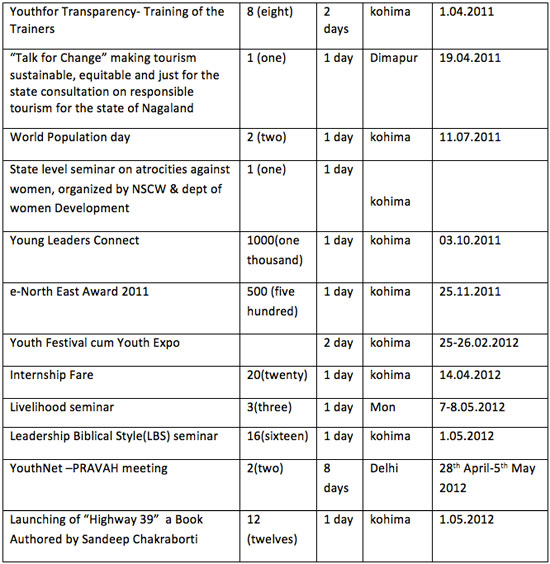 YouthNet conducted the 2nd edition of Young Leaders Connect was held on 20th October 2012, young leaders from various fields come together to speak at the conclave on the theme ‘Connect, Exchange and Strengthen’ at Kisama, Kohima. The conference was chaired by Baichung Bhutia, CEO United Sikkim football club and Nagaland Chief Minister Neiphiu Rio was the chief patron.

The main object of the event is to bring up hot issues, especially regarding the development of the North East region as a whole, as well as to take our region to a new level, besides changing the mindset of the people from other parts of the country towards the people of North East. The conclave brings together young leaders from the Northeast India and from the rest of the country, to connect with themselves, and in the process bring policy makers, strategists, entrepreneurs, professionals, members of academia and students on a common platform.

31 distinguished young achievers from different fields from the entire Northeast comprised the panellists of the daylong conference. Entrepreneurship, Sports, Media, Politics and Education were some of the major fields that were covered during the conference. Rajiv Chandrashekhar, MP, Karnataka,Abu Metha, Press Secretary to CM and the Founding Editor of Eastern Mirror, Jay Panda, MP of Lok Sabha, Conrad Sangma, MLA, Meghalaya, Jarpum Gamlin, CEO, Eastern Sentinel and Partner Radio Ooo La La, Arunachal Pradesh are a few names among all the personalities who took part in the conclave. More than 200 delegates from business, social and education sectors participated in it. 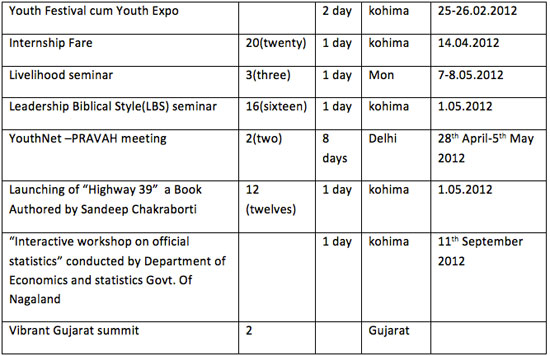