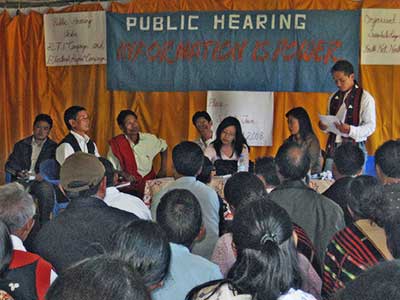 Since August 2005 a series of workshops and awareness building campaigns on RTI have already been conducted by YouthNet in partnership with Commonwealth Human Rights Initiative (Delhi), in nine (out of eleven) district headquarters of Nagaland. This campaign has been highlighted in public platforms and rallies as well as in small groups. Apart from the workshops, YouthNet also had the Right to Information Campaign through Music in Kohima. An official State kick off of the campaign was held in Kohima with Baichung Bhutia (Indian Football Captain) as the Campaign Ambassador.

In the 2008, YouthNet identified four constituencies as pilot project areas for RTI Public Hearing – Suruhuto, Pftsuro, Pughoboto and Chizami, focusing on four areas of Schools, Health Centers, Electricity and Road. The first Public Hearing was held in Suruhuto on the 17th of Oct 2008, organized by YouthNet in partnership with Northeast Network (NEN) and Suruhuto Range Students’ Union (SRSU). A separate detailed report is appended in the website.